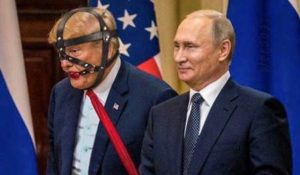 As have many of you, I have been endlessly busy helping to try to save this country from the sleazy, slimy, lowlife, lying, degenerate snake, scorpion and rat who defiles the White House every time he as much as gets near it.

First, his Coronavirus behavior has been beyond shameful, but is nothing less than can or should be expected of or from a person (we shouldn’t even use that word to dignify that dreadful excuse for a human being) who is totally indifferent to anybody else including his own family, as lowlife as each of them are, certainly close to his level of being scum of the earth.

Second, his viciousness and totally false attacks on anybody and everybody he disagrees with, while nothing less that we can or should expect from a degenerate, philandering, lowlife, liar, coward and traitor such as he are still absolutely abhorrent.

Third, his enabling of the hoodlums, thugs, grifters and other sundry and assorted criminals of the FAR right should be utterly nauseating to every American, and yet the morons, numbskulls, nitwits, yahoos, hillbillies, crackers and rednecks who support him are the same vicious, vile and vulgar vermin as is he.

It is, therefore, important that I ask you to be so kind as to consider the following three items which are so relevant that I not only ask you to read them but to recognize that if the tax dodging nazi-lover in the White House steals the next election, this country is not only done for but once that unthinkable even occurs, every one of you will be required to greet every person you see with a “Heil, Trumpler,” and you must ask yourselves if that is what you want to do for the rest of your lives, because if he gets in again, he and his Republican toadies will subvert and pervert both democracy and the Constitution to a point where neither is recognizable.

First be assured that there will be NO freedom of religion unless your government is free of religion, which is why our founders wrote the absolute separation of church and state into the Constitution.

Second, our Constitution absolutely does not belong to the FAR right wing lying, hypocritical so called “born agains,” the Christian nationalists who care nothing about the tenets of Christianity, nor are they interested in being kind and decent and caring and forgiving people. Our Constitution belongs to all of us—we, the people—and, simply put, it is time for all of us to take it back from the lowlife, low grades of the far right, scum such as Franklin Graham, Pat Robertson, David Duke, the so-called “Proud Boys,” the American KKK’ers and the members of the nazi party. Trump is pure garbage and all of those people are part of the Hitlerian Trumpite Cult.

Third, and perhaps most important, when the FBI stops a plot to kidnap a governor, and the president refuses to thank the FBI because he is engaged in a hateful fight with them and he can’t be thankful for the governor’s safety because she is a Democrat and he hates her, and he won’t condemn the terrorists because they are his base of nothing other than lunatics, maniacs and criminals, then, my friends and dear readers, it is absolutely, positively and unquestionably time for the most corrupt person, the biggest degenerate, the person who is the pluperfect example of a liar, a coward and a traitor, to be replaced, and, not regretfully to say, by any means necessary.