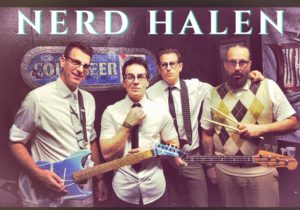 As the name implies, all the guys in the band are nerds. Well, not really, they just play nerds on stage. It’s definitely not what you expect; here you have 4 hot guys turning themselves into nerds.

It’s not something you see everyday; usually, people are trying to make themselves look hotter, not playing down their looks, and that is the draw with this Van Halen tribute band.

Think about it, I would bet that it’s every nerd’s dream; to be on stage, and being the rockers that they have dreamed of being forever. Now, they can see themselves on stage, rocking out, living the dream, and with everyone loving it.

With Nerd Halen, you have a group of talented singers/musicians who have the talent to do the job right. Nerd Halen consists of Hal Sparks on lead vocals, Caleb Rapoport on guitar, Victor Broden on bass and backing vocals, and Jeff Page on drums.

Each one of these guys have been performing in different bands for years, and you can both see and hear the proof; because they are sure in their performances, and even if they don’t look like typical rockers when they perform; they can back up the act with real talent, they are not trying to imitate Van Halen. They are putting their own twist on the songs we have all loved since they were introduced by Van Halen back in the day.

To me, this shows the amount of talent that the quartet possesses; because even without trying to look like Van Halen; they are paying tribute in their own way, but with a fresh take on what a tribute band does in regards to the band they love.

They are staying true to the music of the group they all admire, but they are having fun with it; they are being funny, joking around; actually to me, it’s almost close to what Van Halen did when David Lee Roth was the lead vocalist for the group.

I was a teenager in the 80s myself, so I remember watching DLR jump around the stage, rocking out but always seeming to have fun with it; I think Nerd Halen does the same thing, they have put their own spin on it, with a comedic flair, but they don’t screw around with the music, just how they present it.

The band was formed in 2019 when Caleb Rapoport ran into Hal Sparks at The Whiskey a Go-Go’s Ultimate Jam Night. Caleb says that he had always wanted to do a Van Halen tribute band, with a twist. He wanted something different, something that would stand out from all the other VH tribute bands; and boy, did he.

He says that he saw Hal at the Rocky Horror themed night, and Hal was playing the nerd; he was convinced that with Hal, it could work, and they could create his vision of a VH tribute band.

He approached Hal, and said you’re perfect, and Hal agreed with him, lol.
Whether it was clear at that moment why Caleb had said this, it was a good way to bring up the concept of the band that he wanted to start. We all know the saying, you catch more flies with honey than vinegar.

Being a comedian as well as a singer, Hal could bring the humor needed to make this band stand out from all the other tribute bands around. To be honest, at first no one thinks of someone performing Van Halen songs that don’t look like the stereotypical rocker image.

Now imagine hearing all the best VH songs coming out of a group of guys dressed just like the nerds everyone knew back in high school. Not what you expect right, but it brings a fresh and interesting angle to groups trying to be Van Halen, even down to how the guys dressed when the band was originally performing all these hits.

So when they start to perform, no one is expecting the kind of music they get, from a group of truly talented guys, who work extremely well together. Hal, Caleb, Victor and Jeff who have all performed in or are still in other bands, are doing a great job with Van Halen’s music and the effort they put into their performances is a true tribute to an amazing band, especially with the tragic loss of Eddie Van Halen recently.

Also, on a personal note, I just want to pass on my sincere condolences to the family of Eddie Van Halen during this difficult time, especially with everything having been so changed these past 8 months or so, making it hard for people to mourn as they normally would. I’m sure that all true Van Halen fans feel the same way, and wish that the family can feel the love being sent their way as they go through this time.