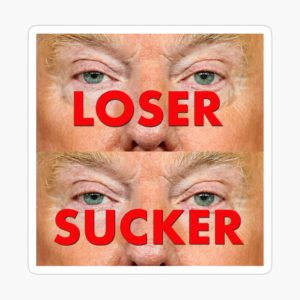 Even those Republicans with as little as half a brain (many, too many of them, unhappily and unfortunately) recognize and realize the enormity of the damage done by and during the disastrous Trump presidency.

Donald J. Trump was, simply put, the single most unqualified person in the history of this great (the “Make America Great Again” nonsense was total hooey, completely and utterly without logic or validity, overbearing and overwrought hype for which too many morons fell) republic to have ever DIS-served the country. Simply put, Trump did not serve America: his tenure was not simply a disservice to America but it was also a total disaster. However, he certainly did serve himself, his family, and those who disingenuously bowed down at his feet to pay him false tribute in order that they might enrich themselves.

Before I get further into the discussion, I will state that I am somewhat certain that a minority of our readers are thinking (or saying) “oh come on now, Henry, it wasn’t THAT bad.”

But in truth, fact and actuality, it was worse. America was great before that con man and huckster became president (Michael Bloomberg, during the campaign, said: “I’m from New York and I know a con when I see one and Donald Trump is the biggest con man I have ever seen”) and in doing so disgraced himself to an even greater degree than he already had done in his many years of being a chiseler, conniver, fraudster and grifter, with his fakery, hucksterism and conniving combining to embarrass and humiliate this country through his unending acts of banal stupidity, indifference, arrogance, chauvinism and favoritism. All of those, coupled with his incredible indifference to a level of nepotism never seen before in any public office in U. S. history have all combined to bring us to the point at which we are today.

I will refrain from using words which, though completely factual, may fall under the “seven proscribed words” commentary of comedian George Carlin, hence (I am pleased to opine) denying myself the opportunity to stoop to the level of a lowlife, classless, degenerate, corrupt liar, coward and traitor who was lucky enough to hoodwink enough people to get himself elected to the presidency, even though he lost by three million votes.

His perceived (and massively exaggerated) self-importance was, unhappily and unfortunately, foisted on to the American people, beginning with his pre-election rallies. Among the most hideous and vile of the innumerable disgraces was what occurred on the day that he mocked a news media representative afflicted with Cerebral Palsy. That, alone, should have turned off all but the biggest and most shameless of the cretins and damn fools who voted for him, but, instead, it triggered their total lack(s) of sensitivity, caring or empathy. By being the vicious mocker of those less fortunate than he, he became, to no small degree, a hero to those who thought, felt and believed that actions such as those were not only enjoyable (as well as funny) but acceptable. They never have been and they never will be.

In closing, kindly consider the following: the Trumpites can not and will not accept the fact that “their guy” (a corrupt, degenerate, whore mongering, tax dodging, porn star loving, contractor and employee screwing, six phony bankruptcies and five phony deferments taking, low grade, low class, immoral, unethical coward) has lost. They live and breathe on Trump’s every word, acting as if it has come from “on high,” never-minding or caring if those words are legitimate or honest or not, determined to believe and accept his vile and calumnious commentary whether true and accurate or not. In their massive blindness, stupidity and wiling self-deception, they believe, for whatever the reason/s, that he won and the election was somehow “stolen” from them.

In and to my mind (as well, apparently, as a majority of American voters) those people have become lost in the miasma of Trump’s and his inner circle’s unending stream of completely nonsensical and totally fabricated hooey. Those misguided and indoctrinated souls, again unhappily, are not greatly different from the completely brain washed North Koreans with their blind belief regarding their system and their “dear leader.”

The members of the Hitlerian Trumpite cult in the United States actually believe the fabrications and nonsense they have been handed by him and all the phony web-sites with their outrageous allegations, right-wing garbage that breathes and spreads disinformation, and sows doubt and distrust. They are the people who, shamefully, believe in the “Q-anon” crap (my first off-color word) and are willing to accept any bit or tidbit of pure and utter nonsense that feeds their disordered mentality.

We will close—for the moment—wishing you well and with almost unending thanks that this national nightmare will come to a close on January 20th. Next column, we will certainly offer thoughts regarding the ridiculous lawsuits, the stupidity of his and his cult’s protests, and the damage he can and might be between now and the day that Mr. Biden steps in as President.

Be—and stay—well, all, and please stay safe. (And perhaps a few words next time on Trump’s total dereliction of duty regarding his utter failure regarding Covid-19)

With all good wishes.