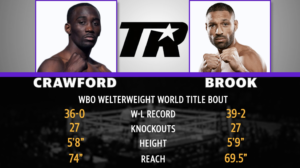 This Saturday at The Bubble, MGM Grand in Las Vegas, current WBO Welterweight Champion Terence “Bud” Crawford, 36-0, 27 KO’s defends his strap against former IBF Welterweight Champion Kell Brook, 39-2, 27 KO’s. On paper, two big names, with Brook on a three-fight win streak since being knocked out by Errol Spence, JR. back on May 27, 2017.

Brook’s only hope in this fight is to stay out the pocket or chance getting knocked out by the much more powerful puncher in Crawford. This is a tall order, but Brook can box and if that game plan can be held for 12 rounds, there is always a chance of him taking a decision. Realistically that is a tall order!

Crawford on the other hand who has seven knockouts straight on his record, will no doubt, want number eight and go for it against Kell!

We do know from one fight in particular of Brook’s when he faced then Middleweight Champion Gennady Golovkin who stopped him in the fifth round when Kell’s trainer threw in the towel back on September 10, 2016. In that fight, Brook took a huge beating, but showed so much heart and gained new fans even in defeat.

In this the year of Covid-19, big fights without big crowds’ ringside are a very different look, but the sport of boxing as it has always done, still goes on.

For boxing fans, we just want to see fights. So, for now, we can settle without the crowds even if they are truly missed!

Even though Kell Brook is the underdog of the fight (+900) according to the odds from SportsBettingDime.com, he feels positive and believes it would be his greatest achievement if he caused an upset against Crawford.