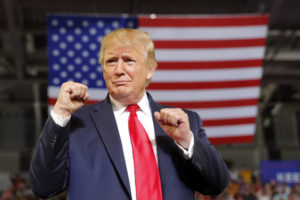 Last month, Sweden’s TV 4, which is the largest broadcast network in Scandinavia, sent Ana Tilberg, their political correspondent, to cover the U. S. election. Her producers were so afraid of the possibility of Trump-incited mayhem and rioting that they told her that it would be necessary for her to bring a bulletproof vest, a helmet and a gas mask with her, and that understandably.

Because of Trump, the U. S. has appeared to much of the world to be out of control, for no few reasons, not just because of the Covid-19 virus.

The clown in the White House not only had urged his followers to vote twice but told his Hitlerian Trumpite Cult faux-militia group, the Proud (and dumb) Boys to “stand by” as peaceful protests sometimes turned ugly and degenerated into rioting with several fatal beatings and shootings. Meantime, showdowns between various groups were predicted for Election Day.

Fortunately, Ms. Tiberg didn’t need the protective gear. “There was no violence, and not a lot of cheating — the system worked. And people showed up in numbers never seen before. I thought that was so impressive,” she said, to which she added, “That’s what I brought back to my viewers: The U.S. pulled it off.”
Citizens across the Atlantic cheered the election results. “Europeans were overwhelmingly happy that Trump lost and Biden won,” said Jon Henley, political reporter for the London-based Guardian. But now, he is reporting, “many Americans are looking on in shock, horror and disbelief — saying that what is now going on in the U. S. is not only not right but is terribly dangerous.”
While the above paragraphs were put together from a number of diverse sources, the upshoot is that—as this columnist has stated several times—the criminality of the Trumpites, their leaders, and this totally corrupt and ethics-less administration is beyond shameful, and every person in it who has participated in any way, from the Secretary of Education (which she knows nothing about) to the Secretary of Housing and Urban Development (which he knows nothing about) to the group of little punk family members, who know nothing and anything, to, of course, inarguably and unquestionably, the lowlife, degenerate, lying, thieving, corrupt coward and traitor in the White House, not just “should,” but MUST face criminal charges and when found guilty, be incarcerated.

The entire and totally disgusting staged and feigned “outrage” by his simpleton followers which was propounded by him after the whore mongering, porn star loving, tax dodging, contractor and employee screwing, SIX phony bankruptcies taking, five phony deferments taking piece of vermin in the White House clearly, totally and unquestionably lost the election will, hopefully, be cause for him to be installed in a prison cell for the rest of his miserable and brutally callous life. He is a stain on America’s name and reputation and to allow him to walk free following the disgrace of his term (he demeaned and defiled the Oval Office each and every time he even walked toward it, much less entered it) would be the equivalent of letting the top nazis (I will NEVER, EVER capitalize that word) walk free following World War II.

If our readers think or feel the above is harsh, then I would respectfully suggest that you re-direct those feelings toward what such as Mnuchin and Barr and Pence and the governors and/or attorneys general of Texas and Florida and the other 15 states did to try to overthrow the election: it is very simple: the sleazy, slimy, lowlife degenerate rodent in the White House has spent his entire life lying to and conning every person he has ever come into contact with: He is a grifter, a liar and a crook of the first and worst order and does not have a single ethical bone or a strand of decency in his totally and completely corrupt body, and, further, he has not one iota of a moral compass to help to guide him in doing what is good and decent and fair and right for anybody he has ever met, much less those he had sworn to serve.

And the bottom line: who is worse, him or his blinded by stupidity followers? Well, truth be told, I would have to say the little morons, numbskulls, nitwits and damn fools who follow him are worse: he knows what he is doing. They, for the most part, are too stupid and too blinded by their own ignorance to know how wrong they have been from “day one.” And, in finality, to use the old saw, both he and they are “always wrong and never in doubt.”

Be—and stay—well, all, and, above all, stay safe.

PS: That piece of garbage in the White House is demanding that the Covid vaccine be named after him. I have a better idea: I think that we need to begin a national effort to name that horrible killing machine of a virus after him, certainly not the vaccine. That, to me, is the one and only thing he has ever, in his miserable, vile, corrupt life, deserved.