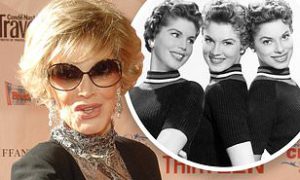 Beloved singer Phyllis McGuire who had hit songs with the family act, The McGuire Sisters and dated the infamous gangster Sam Giancana has died at the age of 89 on December 29, 2020.

Alongside her sisters Christine and Dorothy they were seen on countless magazine covers and TV shows, appeared in nightclubs and concert halls, and had 10 songs in the Billboard Top 20.

Their two No. 1 hits — “Sincerely” and “Sugartime” — were massive hits of a bygone era that truly was a beautiful time in music history.

Ms. McGuire, who was 89 and the last surviving McGuire sister, died Dec. 29 at her home in Las Vegas. Her death was announced in a paid notice in the Las Vegas Sun newspaper. The cause was not disclosed.

Even as musical tastes began to change, the McGuire Sisters kept going strong. By 1960, each of the sisters was earning more than $1 million a year. From all accounts, McGuire was a welcomed addition to the Las Vegas scene where she gave to countless charities.

Ringside Report sends its condolences to the McGuire Family in their time of grief.