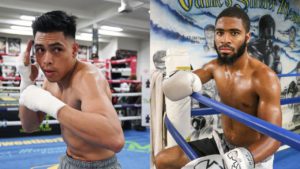 On January 23, 2021 from Mohegan Sun Casino in Uncasville, Connecticut WBO Super Bantamweight Champion Angelo Leo, 20-0, 9 KO’s defends his belt for the first time against number one WBO contender Stephen Fulton, JR., 18-0, 8 KO’s. Leo is the odds (-275) in favor according to Sports Betting Dime.

On paper we have two undefeated young fighters both who are 26 years of age and have faced pretty much the same level of opposition in their young careers.

Leo sports 9 KO’s on his record with Fulton, JR. having 8 KO’s. This usually tells us they are more of boxer than they are punchers. So, in theory, we should have a tactical fight between two young warriors with the fight going to the cards to determine the outcome.

Boxing in the time of Covid-19 still keeps moving forward. This is good for the boxers and especially the fans of the sport.