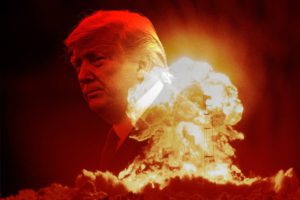 While I have tried, in this column, even if only minimally, to maintain at least a semblance of even-handedness in my discussions of the lowlife who desecrated the White House every time he walked through the gates or his limo drove him through the driveway arches, the storming of the capital because of his ordination and exhortations, and the horror of the Covid-19 plague have made it certain that stating the truth regarding that shameful example of a prime example of an American piece of total detritus is, indeed, completely equitable and totally evenhanded.

We begin today with the horror of the virus, and the comment is “short and sweet.” As stated by Fareed Zakaria this morning on CNN, the FACT that, with only four percent of the world’s population the United States can “boast” (my word, not his) having 25% of the total number of Covid-19 cases is both alarming and astounding, if not shameful, and, truth be told, that horrible statistic is due to one person (I can not use the word “man” when describing Trump, for that liar, coward and traitor is anything but “a man”), the same self-centered egregiously narcissistic, prevaricating, megalomaniacal, psychopathic sociopath who, late in March of 2020, stood in front of innumerable news cameras and uttered the nonsensical and filled with horse manure comment that, “Poof! Like a miracle—on April First it’ll be gone!” Sadly and horribly unhappily, and while what should have been gone on April first was that prevaricating piece of dung, the virus—thanks to him, totally—was just ramping up, with its worst and most murderous days ahead. There are now more than 400,000 Americans dead because of Covid, the blood of almost all of them totally on his hands

Now, though, we move on to the next issue and element: who was or is worse, the Trumpster or the damn fool nitwits, half-wits, lunatics, morons and brainless g-d fools who have supported him and his rantings and ravings, none of which were valid or of value.

Folks, anybody who was engaged in that vile and disgusting attack—which is all and the only thing it was—on the Capitol should now be arrested, not permitted bond, and charged with sedition, following which the maximum sentence of twenty years should be handed down by the presiding judge or judges. None of those damn fools, male or female, were “coerced;” every idiot and every numbskull who participated in that shameful affair knew exactly what he or she was doing and because this is a family list, with readers of all ages, I know that I must be careful with my terminology, in effect using no “four letter words” as adjectives to properly describe the penis-brains who participated, using only two scientific terms, and, frankly and succinctly, they were and are all anal orifices.

Indeed, the Senate will, hopefully, vote to convict the traitor who was the former occupant of the White House, but whether or not enough Rethugnacans will have the—oh, what’s the wonderful Italian word I’m seeking?—oh, yes, now I know, the cahonies to convict that slime is far from certain because that party, having become known for being totally ethics-less, devoid of honesty or decency, and totally without a moral compass of any kind, can certainly not–now or anytime in the near future—be counted on or expected to do the right thing, which, and obviously in this case, is and will be to vote to find the Trumpster guilty of all and every charge brought in the impeachment.

Be well, all, and please stay safe.

PS: Trump wanted an airport or a highway named after him, but, and with great pleasure, I am delighted to inform you that the new and soon to open rest stop on the New York Thruway will have a separate building named for him, the Donald J. Trump Commode, that, of course, being the only thing(s) he should ever have named for him.