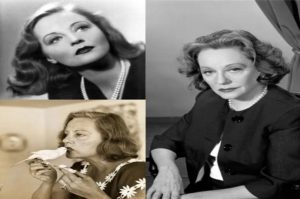 Tallulah Bankhead was born on 31 January 1902 in the deep South: Huntsville, Alabama. A member of the Bankhead and Brockman family; both her grandfathers and uncle were US Senators and her father was a US Representative in Congress for 11 terms. All were Democrats but strict conservatives who supported white supremacy and segregation. Tallulah broke the family tradition by being so liberal she supported The Civil Rights Movement. Tallulah was named after her grandmother who was named after a town in Georgia called Tallulah Falls. Three weeks after Tallulah was born her mother died of blood poisoning. Coincidently her grandmother had died given birth to her mother.

On her deathbed Tallulah’s mother said that the family should look after Eugenia (Tallulah’s sister), adding “Tallulah will always be able to take care of herself”. From an early age she realized that being theatrical would gain her the attention she was after and that’s what she did. Her grandmother often threw a bucket of cold water over her to stop the tantrums. She discovered she had a gift for memorizing literature, poems and plays. At age 10 her father sends her to a convent school in New York: Covent of The Sacred Heart When her father’s political career began to blossom, she went from school to school with each one coming closer to Washington DC. When she was 15, she sends a picture of herself to Picture Play who was doing a contest, awarding a trip to New York and a movie role to 12 winners. Tallulah forgot to send her name and address with the picture and only found out she was one of the winners when she was reading the magazine at her local drugstore; Her picture had the capitation “Who is she?” When she contacted the magazine and claimed her win, she went to New York and was paid $75 for three weeks work on “Who Loved Him Best”. It was only a minor role but she had found her niche; Not only in acting but also in New York. She moved into the Algonquin Hotel which was the place to be for the artistic and literary people and became a member of the famous Algonquin Round Table. Tallulah’s dad warned his daughter to stay away from alcohol and men when she moved to New York. Tallulah’s response: “He didn’t say anything about women and cocaine” She became friends with Estelle Winwood and Ethel Barrymore.

In 1919 she made her stage debut and realized that she liked it better than doing movies. After a few movie roles and stage plays and nothing much happening, she became frustrated and moved to London. Here she received the praise she was looking for after she starred as Amy in Sidney Howard’s “They knew what they wanted”. The show won the 1925 Pulitzer Prize. She bought herself a Bentley and it became her toy. She loved driving in it. Lousy in directions as she got lost many times in the London streets, she would call a cab, paid him to drive to her destination and then she followed the cab in her Bentley. In 1931 she returned to America and moved to Hollywood where she starred in four movies. George Cukor directed her first movie “Tarnished Lady” and they became friends. Being bored in Hollywood she once asked Irving Thalberg: “How do you get laid in this dreadful town?” Thalberg’s answer? “I’m sure you’ll have no problem. Ask anyone”

She starred with Gary Cooper and Cary Grant in “Devil and the Deep” and later said “Dahling, the main reason I accepted the role was to fuck that divine Gary Cooper!” Back on Broadway she starred in three plays which later became huge box office acclaimed movies: Forsaking All Others with Joan Crawford, Jezebel and Dark Victory both with Bette Davis. In 1939 she played Regina Giddens in Lillian Helman’s Little Foxes and it won her The Variety Magazine Award for Best Actress of The Year. In 1944 she played journalist Constance Porter in Alfred Hitchcock’s Lifeboat and it won her The New York Film Critics Circle Award.

In 1950 NBC gave Tallulah her own show: The Big Show in which she was not only acting but also performed monologues which were often written by Dorothy Parker. In 1952 she wrote her autobiography: “Tallulah: My Autobiography”. Struggling with alcoholism and drugs, her body became more and more frail. She took cocktails of drugs in the hope she would fall asleep. She hated being alone and this slowly turned into depression. In 1957 she made an appearance on the Lucille Ball-Desi Arnaz Show. The audience loved it but Luci Ball got really frustrated with Tallulah’s behaviour on set as it took her three hours to wake up and she often appeared drunk. She died on 12 December 1968 at age 66 in New York. Cause of death was double pneumonia. Apparently her last words were “codeine and bourbon” In her personal life she was famous for her many affairs with men and women. Her favorite slogan was “I’m as pure as the driven slush” She often got naked at private parties and was as outspoken as could be. Being a baseball fan, her favorite team was The New York Giants. She made a referral to both Willies when she said ” There have been only two geniuses in the world, Willie Mays and Willie Shakespeare. But darling, I think you’d better put Shakespeare first” A lifelong Democrat she supported civil rights and opposed racism and segregation. As mentioned earlier, coming from the deep south, she broke with many Southerners. She voted for every Democratic presidential nominee at every election from 1928 – 1968, even if this meant flying back home from London so she could vote in the 1924 and 1928 elections. She was married once to fellow actor John Emery but the marriage only lasted 4 years. No children of her own, she had four abortions and a hysterectomy by the age of 31. Her outspokenness earned her a number one spot in Hays Committee’s Doom Book: a list of 150 actors and actresses who were considered unsuitable for the public.

She publicly called Hays “a little prick” Not only having affairs with men, there were many women too: Greta Garbo, Marlene Dietrich, Hattie McDaniel, Billie Holiday. Tallulah never called herself bisexual in public. She preferred the word “ambisextrous”. The famous husky voice was the result of chronic bronchitis from a childhood illness, but she was also a heavy smoker who consumed 100 cigarettes per day. A Liberal Rebel before her time, always breaking taboos, never afraid to say out loud what many didn’t dare to say, affairs with men and women, drugs and alcohol and swearing like a sailor.

A woman after my heart. Tallulah is one of my heroes. No doubt about that Dahling!