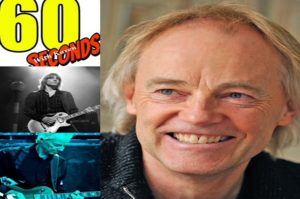 Snowy White is known for the great 1983 song “Bird of Paradise” which was a huge hit all around the world. He has retired from playing Live but still makes music. His new album “Driving on the 44” will be released in July.

KB: Your real name is Terence Charles: Where does Snowy White come from?

I was given this name at school by my school friends because my surname is White.

I had two and a half years there and after that time I wanted to do my own thing and get a band together with my friends, play my own music.

Yes, that was an interesting time. But it’s not very satisfying for me to play someone else’s music.

There is no real story behind the song. I first wrote the chord progression for the guitar solos, nice easy chords for a nice easy solo, and then decided I should put some singing verses in there too.
I don’t know why ‘bird of paradise’ came into my head. Everything came together in about 20 minutes. Sometimes a song just writes itself. It is still quite popular, but I don’t really know why, I guess it’s because it’s just a ‘nice song’.

KB: You retired from playing Live in 2019? But you are still recording?

Yes, I will not do any more live shows. I am still recording.

KB: Do you have anything new coming out this year? Is there anyone you would like to make a record with?

I have another album coming out in July. It’s called ‘Driving on the 44’. It will be on cd and vinyl. I’m happy playing with my usual friends, I don’t want to play with anyone else.

KB: What have you done the last 2 years when the world was in lock down and you had nowhere to go?

Because of Covid it was difficult to be in a studio with other musicians, so I did most of the recording of the new album in my home studio with my son Thomas on drums. I could take as much time as I wanted as I wasn’t going anywhere, so it was very relaxed. Apart from the recording my days go by the same as everyone else’s day does. Bit of shopping, cooking, cleaning! I keep busy, never bored. I don’t really feel like travelling any more. I don’t think I’ll ever get on another aeroplane, so I’m happy to stay at home.
Even if there is no Covid I wouldn’t go very far.