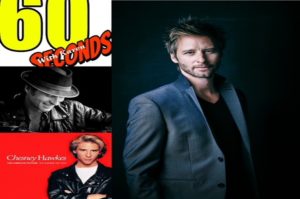 We all know Chesney Hawkes from his 80s song “The One and Only” which was a monster hit all over Europe. Last month he released a box set with all his albums called “Chesney Hawkes: The Complete Picture”

KB: We best know you from the song I am the one and only: It is from the movie Buddy’s song where you also appeared in at age 19? Song was written by Nik Kershaw?

Yes, Nik, is still a very good friend and we write songs together all the time…In fact he has written a few songs on my upcoming album due for release in the summer.

KB: Your dad was a well-known singer too with The Tremeloes: Did you always wanted to do what he did?

My dad says I came out singing. I never wanted to do anything else to be honest. Music is like breathing for me!

KB: You played in a musical based on Barry Manilow songs?

Yes, that was a fun project, 4 months on the road singing Barry songs. Barry was a gentleman and helped me through all the key changes!

The box set is a 5 CD 1 DVD set with all my albums and a lot of odd rarities. A cathartic look back on my career

KB: You did a new version of “The One and Only” which was released earlier this year?

KB: Are you still touring and who would you like to make a record with? Any current singers or musicians you like?

Yes, I am always on the road. If anyone is interested in joining me out there, please visit my website HERE

Current singers I’d like to work with? Sure, Adele, Ed Sheeran, Taylor Swift…My favorite at the moment is Phoebe Bridgers.

KB: How did you spend your days in lock down the past 2 years?

Lots of writing and recording, but mostly spending time with Family…