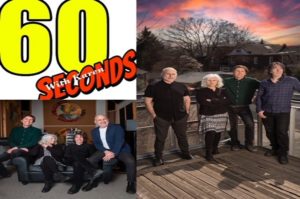 The Cowboy Junkies are a band from Toronto, Canada who rose to fame in America after their version of Lou Reed’s “Sweet Jane” was used in the 1994 movie “Natural Born Killers”. They have a new album out where they cover songs by David Bowie, Neil Young, Bob Dylan and The Rolling Stones.

KB: You rose to fame with your rendition of Lou Reed’s Sweet Jane which was used in the movie Natural Born Killers and on the soundtrack: What intrigued you to do this song? Do you know what the late great Lou Reed thought of your version?

We hadn’t thought of doing a Lou Reed song until we heard a live version of Sweet Jane on Velvet Underground’s 1969 album. It is a relatively laid-back take of this song which is rumored to have been written a few days before and contained a beautiful bridge section which was discarded after this recording. It fit with the sound we had been developing and we haven’t stopped playing it since. Lou gave us a line to use for the promotion of Trinity Session, so we think he liked it.

KB: You have a new album out called Songs of the recollection where you cover David Bowie, Neil Young, The Rolling Stones, Bob Dylan, and The Cure: Why these artists and why did you choose these songs?

These are some of our favorite covers of songs by artists who had a huge influence on us.

All these artists felt natural for us to interpret except for David Bowie, who we loved but never thought we could cover successfully, and a few years ago someone mentioned Five Years as a possibility, and we went to work on it. It’s now one of our favorites to play live.

KB: You have played in the same line-up since 1985: How do you explain the closeness you have as a band beside the fact that you are related?

Family can be a great bonding agent, or not. We’ve been lucky. Our love of music is paramount though.

KB: Is there a music style that you have not covered yet but you would love to? You have covered many music styles in your career.

We always go back to the blues.

KB: The whole world has been in several lock downs due to the raging pandemic: what have you been doing during these lock downs?

Spraying every object around me with alcohol was fun for a while. Watching every episode of Seinfeld, Curb Your Enthusiasm and Always Sunny In Philadelphia was even more fun.