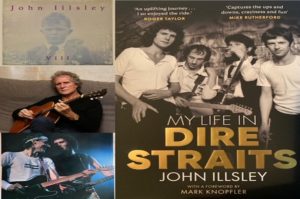 We all know the band Dire Straits and Mark Knopfler but who are the other musicians? John Illsley is the bass guitarist and one of the founding members. He played on all their albums and was inducted into the Rock and Roll Hall of Fame as a member of Dire Straits in 2018. His new album “V111” was released on 4 March 2022. He is currently touring The UK until 5th of May.

KB: How did you first meet Mark Knopfler?

I meet Mark in the council flat I shared with David K, I came in one morning and found him asleep on the concrete floor in the sitting room guitar across his body.

KB: Who came up with the band’s name Dire Straits?

A musician friend of Pick Withers our drummer, as Pick had been a professional musician for years and was still in Dire Straits.

KB: The first big song was Sultans of Swing in 1978. I love that song. What is the story behind it?

Mark and David had seen this band in a Greenwich pub before I meet them Mark wrote the song shortly afterwards.

KB: Private Investigations is mesmerizing: What is the story behind it?

It’s a song about being a songwriter I think.

KB: The 1985 album Brothers in Arms was the most successful one: Were you surprised it sold so many copies and had lots of hits on it?

Well, the previous 4 albums had been pretty successful, this coupled with the birth of the cd and MTV in Europe and Money for Nothing being such a big worldwide hit, all helped.

KB: How was it performing at Live Aid in July 1985 with a global audience?

A remarkable experience for all involved, it drew awareness to some important global issues.

KB: You published an autobiography in November 2021?

It’s my story about my life and times before, during and after the band stopped playing together.

KB: Do you have any tours coming up or a new album or song release? You did a collaboration with Cunla?

KB: Any current artists you would like to collaborate with?

Not right now I’m too busy.

KB: How did you spend your time the last 2 years when the world was in lock down due to Covid and you couldn’t go anywhere? I hear you are a keen painter.

I made a recording wrote a book and painted some pictures.