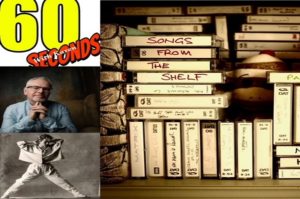 Nik Kershaw’s “Wouldn’t it be good” and “I won’t let the sun go down on me” are Gems. Songs which are still beloved today. He has a new EP out on 6th of May called “Songs from the shelf”: Check it out! Catch him on tour this summer.

KB: Your 1984 debut album Human Racing produced the great song Wouldn’t it be good: what is the story behind this song?

This was the last song to be written for the Human Racing album and was the only one without a demo, so we started from scratch in the studio. I have great memories of sitting in the control room at Sarm East Studios painstakingly multi tracking all the guitar parts. Still a favourite of mine as it was the song that broke me and changed my life.

KB: The album also produced I won’t let the sun go down on me: What is the political message behind this song?

It was originally an acoustic protest song. It turned into a pop song in the studio. In the mid-eighties, the threat of nuclear obliteration was at the forefront of a lot of people’s minds. It was a time of protest marches (C.N.D. – campaign for Nuclear Disarmament) and this song is just giving voice to that movement. It’s a catchy song with the word “sun” in it so it still gets played as a summer party song even now. I don’t think many people were aware of the meaning of the song and even fewer cared.

KB: You wrote “The One and Only for Chesney Hawkes: Did you not want to sing it yourself?

I stopped recording my own records between 1989 and 1998 to concentrate on writing and production for other artists. The One and Only was pretty much the first song I wrote during this period. It was never meant for me, and it’s hit potential never occurred to me until Ches came along and recorded it. I still reserve the right to play it live occasionally.

KB: In November you released your 2nd album The Riddle: That’s 2 albums in the same year? Why? What was the reason?

It was the record company’s idea (MCA), and I was dumb enough to go along with it. I imagine they were thinking of riding the wave of the first album and getting something new out before Christmas. I had 2 weeks to write the whole album and was still promoting the first album while recording the second. Madness.

KB: In 1985 you participated at Live Aid Wembley Stadium: How was that? Must have been incredible?

I can’t deny it was incredible. It was also terrifying, and I felt woefully unprepared for walking out on stage in front of 80,000 people in the stadium, 2 billion TV audience and a fair few of my musical heroes. I was lucky enough to be on quite early, so I had the rest of the day to relax and enjoy the incredible atmosphere.

Yes. I was lucky enough to count myself as a friend for a few years and he was a great champion for me. He was great at searching out and encouraging new talent. He still does it now. I played guitar on three tracks on the Ice on Fire album and Nikita was one of them. I had no idea it would turn out to be such a massive hit, but it still makes me smile whenever I hear it on the radio

KB: Are there any artists you would love to work with? Your latest album was recorded at Abbey Road during the pandemic?

I spent a lot of time collaborating in the 90s and came to the conclusion that I’m just too much of a control freak to be any good at it. That’s why I went back to making my own records in 1998.
The last album was finished before the pandemic but yes, some of it was recorded at Abbey Rd. As it happens, it was studio 3, the same one we recorded the One and Only in. You’re always aware of the incredible history of the place. It’s a magical place to work.