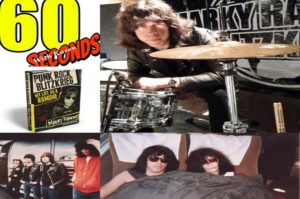 Marky was the drummer for the Punk Rock Band The Ramones and performed in the movie Rock n Roll High School. He is touring with his band Blitzkrieg. Catch him on Tour this summer in Europe.

KB: We all know you best as drummer for The Ramones. You replaced Tommy Ramone in 1978 and was asked to leave in 1983. You were with them during Rock n Roll High School. How was this?

You played in the movie too? Filming RnR High School was a blast, I am a big fan of producer Roger Corman who produced so many of my favorite B movies in the 1950s and 60s. Joe Dante was working on the movie too, he just came from the now classic Jaws rip off Piranhas which is a trash classic now. And yes, I am in there.

KB: You came back to The Ramones in 1987 replacing Clem Burke who only played 2 shows and stayed with the band till the end. Why did you accept to come back? Are you still in touch with CJ and Richie?

The band asked me back as it seems their sit in drummers didn´t work out. I got my act together while I was out of the band and was happy to get a 2nd chance with the people I loved, the originals, DeeDee, Joey and Johnny. And no, I am not in contact with CJ and Richie.

KB: Since 2005 you are hosting your own radio show on Sirius XM called Punk Rock Blitzkrieg. Blitzkrieg is a German word translated fast war or quick war. Why this name? Your band is called Blitzkrieg too?

The radio show is 100% punk rock as is my band. The word Blitzkrieg stands for the power and speed of the music.

KB: In 2011 you won the lifetime achievement award at The Grammys. This must have been a big honor?

Yes, it was a big honor. I was hanging out with Tommy, Clem….We got to meet Julie Andrews which was great too.

KB: I heard you collaborated with Tommy Hilfiger in 2009 to have your own clothing line with leather jackets, jeans and t-shirts, and your own beer line. Do you still have this? You also have your own line of pasta sauce called Marky Ramone’s Brooklyn’s Own Pasta Sauce?

KB: You recently toured South America with your band. How did that go?

South America has been great to me. I have been going there at least once a year since the Ramones broke up, sometimes I went down there three times a year. I played Lollapalooza, Rock in Rio etc. All the major festivals in South America, we did around 500+ shows in South America so far since 1997. We played with Guns n Roses, supported the Who…

KB: The world is coming out of a 2-year pandemic with several lock downs where all you could do was stay at home: How did you spend your time? Any hobbies?

Working on my cars, watching classic movies, watching the original Twilight Zone…and I started painting during the pandemic…Very colorful artworks…you will see more of them very soon.

*Interviewer Note: I would like to say a big thank you to tour manager Matthias Prill who helped coordinate this interview with Marky.