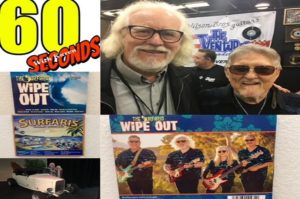 Who doesn’t recognize the beginning of this iconic song? …. Wipe Out! Sun, Beach, Surf and Waves. The Surfaris were inducted into the Musicians Hall of Fame and Museum in 2019 for their great song. Bob is working on new songs and is looking forward getting back out there and play Live.

KB: You are one of the founding members of The Surfaris? I think you are the only surviving member. Who came up with the band’s name?

Yes, founded in September 1962 As of March 25, 2022, me and Pat Connolly are the only surviving members. We had a group discussion one evening at a band practice at Dale Smallen’s studio. Surfin’ Safari was already taken so we thought we would change the spelling to The Surfaris as it related to travel and surfing.

KB: Wipe Out was the band’s greatest hits and it is still beloved today: Who wrote it? The music is very catchy: Who came up with that? And can you explain the title?

Bob Berryhill, Pat Connolly, Jim Fuller, Ron Wilson co-wrote the song at Paul Buff’s Pal Studios in Cucamonga, California in December 1962. Once we finished recording the instrumental song, we needed a title. Jim Fuller came up and clicked a switch blade over the mic and yelled “Switch Blade.” The click was not loud or exciting enough, so my Dad went out into the back alley behind the studio and found a cement-soaked piece of plywood. Pat Connolly broke the board next to the mic. It sounded like a busting surfboard. The question was how do you break a board? You “Wipe Out “on a big wave. So, Dale Smallen came up to the mic and yelled “Ha Ha Ha Ha Wipe Out.”

KB: I heard you were competing against Jim Fuller and Pat Connolly in a local talent show in 1962 and that’s how it started with the band?

Jim Fuller and Pat Connolly and I attended Sellers Junior High in Glendora California in 1959-61. At our 8th grade talent show I performed Walk Don’t Run by The Ventures with my music teacher at the time. Jim Fuller and Pat Connolly needed to borrow my equipment to play a song which may have been Bull Dog by Duane Eddy. They were almost laughed off the stage. I wanted to go up play with them to help them out, but it was quickly over, and we moved on. In early September 1962 on a Saturday morning Pat Connolly and Jim Fuller called and said they would like to come over to my house and practice. We played for about 3 hours. Pat asked me if I would like to play a dance that night. I said “yes, but we don’t have a drummer.” They said, “we would meet the drummer there.” We put all my gear into the trunk of my mother’s car and drove to Pomona Catholic High School were Pat attended. When we arrived inside the Gym Ron Wilson was setting up his drums under the basketball Hoop. That was the first gig–the birth of The Surfaris.

KB: When you left the band in 1983 you became a teacher? That must have been a complete 360 turnaround? What did you teach?

When you have a song as iconic as Wipe Out is it requires a stewardship that goes on behind the scenes. I have never stopped representing the interests of the band. For almost sixty years since we started the band there have been a constant need to protect our music’s ownership, provide direction to uses of the band name as many people have tried to steal or use it for their own benefits. So, The Surfaris has since 1962 been an important part of my life. I have never given up any of my rights to The Surfaris’ name, Wipe Out, or any of our other music. My stewardship of the publishing and other legalities of The Surfaris has always been under my control, despite what others have claimed. I have steered this ship through shark-filled waters through legal means since The Surfaris’ inception. Early on, I learned the value of retaining a top-notch legal team.

Playing with different members of the band or not over the years gave me the flexibility to do additional activities of interest along with music. If you look at just about any music group that has survived for this long there are ups and downs and claims by different members and sidemen who have been used along the way who feel that they somehow own part of The Surfaris. However, any claims other than those of Ron Wilson, Pat Connolly, Jim Fuller and Bob Berryhill or their heirs are not legally valid. When I play with others on stage these days, it is still important to the audience that somebody up there wrote and recorded the original hit song Wipe Out. I am proud to continue to protect and share this original sound that was unique to us four members who started in 1962.

The Surfaris are mainly a summertime beach music group. So, I thought what I could do that would complement my music. Becoming a teacher would be great. I did teach guitar on occasion, but just like music I wanted my other thing I did—racing and working on cars—to be mixed in as well. A friend of mine in 1975 said “Bob, you’re doing high performance engine work at home, and you are teaching me this amazing skill.” He said, “Why don’t you teach automotive to young people?” So, I went down and met my local Community College Dean of automotive and asked if they needed any help. He said yes so, I was able to teach during the Fall and Spring semesters and have the summers plus other times off to do the band. The college was very understanding when I needed extra time off.

KB: In late 2000s you started The Surfaris again with your wife and sons? In 2003 you re-recorded Wipe Out and other original songs. You are still touring with your family?

Like I have indicated before in conversation, the timeline for playing is complicated due to the competition between Jim Fuller’s Surfaris, Ron Wilson’s Surfaris and Bob Berryhill’s Surfaris. Ron Wilson passed away in 1989. Jim Pash (added sax) died in 2005, Jim Fuller followed in 2017. Each of us had versions of the band which complicated things. Audiences were never sure who was going to show up for concerts which caused confusion. My wife and I toured Europe in 1989 and came back to the US and decided to put my version of The Surfaris back on the road with two sidemen until 2000 when my two sons wanted to join us on the road. So, with my wife Gene on Bass, my son Deven on guitar, and my son Joel on drums we took a risk in the eyes of the media and formed a family band.

This also had potential risk for us as a family. It was hard enough to keep a band together and possibly more difficult to keep a family together, but we decided to push forward and give it a try. Fortunately, we did as I look back on all the wonderful things that have happened personally and professionally over the past 20 plus years. Each person was a competent musician in their own right and knew the music well, so it was a smooth transition musically.

In 2003 we re-recorded Wipe Out with my family Band. I was selling CDs of our music packaged by other record companies at my concerts for many years until Universal stopped allowing me to purchase them to sell. So, we decided to re-record the original Wipe Out album except we would write new songs instead of the list of songs by other song writers that Dot Records required us to play for that album. The re-recorded Wipe Out and Surfer Joe have been very well received by our audiences and we had the added opportunity to include new tunes written by my current band, which is what I wanted to do in 1962. Since The Surfaris began in 1962 I have been asked to perform on stage and do TV and newspaper interviews and generally talk about The Surfaris and Wipe Out. Yes, we plan to continue to perform for as long as we can.

KB: I heard that most of the recording material was destroyed in a 2008 fire at Universal?

Yes, the 2008 fire at universal lost Wipe Out and our other Decca material. However, in 2003 the original Wipe Out recording reel was digitally copied before the fire.

KB: How did you spend your days in lock down the past 2 years?

We moved to Nashville January 2019, so I have spent the time working on our new home and developing a successful music publishing company. To kick things off in 2019, The Musicians Hall of Fame in Nashville officially recognized Wipe Out’s contribution to the music world. The original Surfaris were inducted (though not present) and my family band (The Surfaris) got to play for the induction performance, sharing the stage with the likes of Garth Brooks, Vince Gill, Ricky Skaggs, Brenda Lee, Paul Shaffer plus many others. It was the thrill of a lifetime. We also played gigs in different parts of the country until the COVID lock down. As for hobbies, I like boating on the Cumberland river.

KB: Did you write new songs, and anything planned for the future?

Working on new songs for a space/surf music album, due to an interested party in Nashville. I look forward to getting back on the road to play.