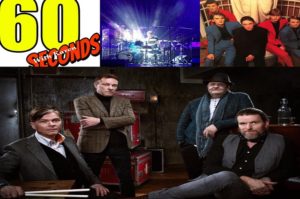 It is 1983 and the band Mezzoforte from Iceland has a huge hit all over Europe with an instrumental song called “Garden Party”. Almost 40 years later the song is still beloved.

KB: Mezzoforte is known for their great 1983 song “Garden Party”: Who wrote and composed that song and were you surprised it became such a big hit?

Keyboard player Eythor Gunnarsson wrote the song and yes it was a big surprise that it became popular. After we finished recording it, we were quite excited and thought it was great. We got a lot of help from producer Geoff Calver who brought in some amazing people to help create the sound of Garden Party. Chris Cameron arranged all the horns and vocals on the song and many other songs. His contribution was a key to the success in my mind. Louis Jardim percussionist also made the song more dance and Latin sounding.

So basically, a great team of people made this possible and were vital in the success of Garden party and Mezzoforte in 1983. However, nothing would have become of it if it hadn’t been for the brave decision of our manager at the time Steinar Berg Isleifsson to start a new label in London and releasing the song under the Steinar Records label. The song first of all became a dance hit in the London clubs and discos then gradually it got to radio, first in England and then the rest of the world, apart from USA.

KB: Who came up with the band name? What does Mezzoforte mean?

Fridrik Karlsson the guitarist came up with the name in 1977. Mezzoforte means “Medium strong” and is a musical term in Italian, mostly used in classical music. He was studying classical guitar at the time. We needed a name of some sort, and this was what was decided on. The rest is history.

KB: You are from Iceland: Not many artists come from there. Bjork, you, and a few others. How do you explain that? Surely there must be great talent in your country?

There are lots of very talented bands and artist to come out of Iceland and many who have become internationally recognised like “Of Monsters and Men”, Sigurrós, Emiliana Torrini. Please google up Icelandic music and you will find lots of touring and recording artists.

KB: Herb Alpert covered Garden Party but at a much lower speed. What do you think of his version?

The Herb Albert version is very different from ours. He was it seems trying to have another hit in the USA under his own name after his own big hit “Rise”, He didn’t like our version of Garden Party, found it too fast and crazy. Some of our favorite musicians at the time played on Herbs version and they played very well, but basically copied most of our parts, but in a slow tempo. I personally never liked it, but perhaps someone did.

KB: What are you doing now? Still touring? Anything new being released?

We are keeping a low profile after 45 years of band work, just a few shows this year in Denmark and one in Germany and 2023 is not decided yet or any new releases. If you look at our website, you can see that we’ve been touring in 2021 and consistently worldwide since 2002 after I got the band back together after a 5-year breakup. You can find a lot of information, articles, interviews and more on YouTube, our website and also by looking at our FB profile.

KB: What have you been doing the last 2 years when the world was hit with lock downs due to Covid and you couldn’t go anywhere?

Like all other musicians we have had to find new ways to survive. We have all been doing different things, but it’s too complicated to answer that in detail, but basically, we have been not able to play for two years like everyone else in the music business. We were able to play 22 shows in Scandinavia last year 2021.