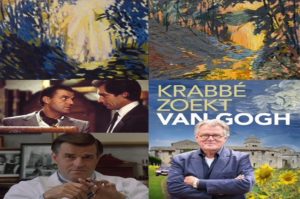 Jeroen Krabbe is a Dutch actor who is not only famous in Holland but also Internationally: Most people will recognize him as Dr Charles Nichols in “The Fugitive” or the villain in the Bond movie “The Living Daylights”. He loves painting and has made some great documentaries about famous painters. The latest one about Frida Kahlo will be shown on TV in Holland in September.

KB: You come from a family of painters: your father and your grandfather were well-known painters. Your son Jasper has also taken this path. What attracts you to painting? Where does the passion come from?

I do indeed come from a long line of painters and my son Jasper, and his daughter Lotus have become painters as well. I think that’s special that a certain talent ‘continues’. I’m proud of that. Painting for me means peace and quiet and concentration. Especially after a long film shoot, there is nothing better than going into my studio.

KB: You were accepted at the Amsterdam Theatre Academy at the age of 17. Why did you decide you wanted to be an actor? What did you find so special about acting and do you still find it?

I wanted to be an actor very early on, right from the age of 6. My mother was a film translator, a profession for which she always had to watch a lot of films. I often went with her and saw all those movies. I wanted that too, that seemed fantastic to me!
I still find acting fascinating. I will continue to do so. To be honest: I am a painter who acts.

KB: Your first big films were Soldier of Orange and The Fourth Man, both directed by Paul Verhoeven: How did you get these roles? Did Paul ask you to audition?

Soldier of Orange was a very special project to work on.
I had to do an ‘audition’ and was immediately hired to play the role opposite Rutger Hauer who I already knew very well; we had attended the Drama School together.
I didn’t have to audition for the ‘Fourth Man’. The role was written for me by Gerard Soeteman. It became my real breakthrough abroad. I have won several awards with it.

KB: In 1985 you directed a stage adaptation of Anne Frank’s diary. You played Otto Frank yourself. The whole cast spent a night in the Secret Annex to prepare themselves: Did you come up with this idea and what was this experience like? Were you able to sleep or was there a lot of talking?

At some point I had come up with the idea to bring ‘The Diary of Anne Frank’ back on stage. The piece was written in the 50’s and was a huge success at the time. Because anti-Semitism was rising more and more in the Netherlands, I thought something had to be done about it. So, it became this piece. We spent a whole evening (not the night) from 6pm to midnight in the Secret Annex. I had it closed so that we were really ‘trapped’. I thought that was a good idea for the whole cast to get that ‘locked up feeling’. They were also not allowed to talk to each other and had to walk with no shoes on and the toilet was not allowed to be used. It worked tremendously. During the rehearsals the next few days you felt that the actors were going to play with that new experience. The piece was ultimately very successful, partly due to the fascinating role of Jip Wijngaarden as Anne!

KB: Jumping jack Flash was your international Hollywood debut: Who offered you the role and what was it like to work with Whoopi Goldberg?

I really liked ‘Jumping Jack Flash’ because Whoopi is such a nice person. My agent in Hollywood thought I should do that -small- role because ‘Whoopi was about to become very famous for her role in “The Color Purple”. She would be nominated for an Oscar and many people wanted to see her second film. And so, it happened.

KB: In 1987 you played Georgi Koskov in the James Bond film The Living Daylights: How did you get this role and what was it like to work with Timothy Dalton? What attracted you to this role? How does it feel to be part of this Bond history now that they are looking for another James Bond?

When I was working on my second American film ‘No Mercy’ with Richard Gere and Kim Basinger, I was told that they wanted me for the villain role in the Bond movie ‘The Living Daylights’. I had been to London before and had spoken to the Bond films team. Didn’t have to do a test, I just got the role. It was the Most Fun thing I’ve ever done. The most beautiful, most special production I have ever worked on. Timothy and Miryam d’Abo are extraordinary, nice people who I still have contact with. If you have been in a Bond film, it means that you still get requests for autographs and pictures every day. I always answer all my mail.
That role is a ‘Golden Stamp’ in my passport as an actor.

KB: And then came The Fugitive: Dr. Charles Nichols. How did you get this role in this great movie? What was it like working with Harrison Ford and Tommy lee Jones? These are world stars!

‘The Fugitive’ started out rather special: I got a call from my agent in the middle of the night if I could get on the plane to Chicago asap. The actor who played ‘my’ role had died suddenly on set and they immediately needed a replacement. Harrison Ford wanted them to give the role to me. I don’t know why, but later it turned out that he had seen ‘the Fourth Man’. He thought that was a fantastic role, that’s why he wanted me. And just like I was on the set of the movie in Chicago. Harrison was a very nice, sweet colleague. He helped me the first few days and made sure I didn’t panic.
I can be very short about Tommy Lee Jones: Nasty Man!!

KB: You have made a great documentary series about painters, and it started in 2015 with Vincent Van Gogh. You went to France and looked up all these places that are related to his paintings. Do you have a favorite Van Gogh? You did the same with other painters?

I was asked by the television station Avro if I wanted to make a program about Van Gogh. At first it seemed rather nonsense to me because so much had already been said and done about Van Gogh. I did it anyway but ‘on my own terms’; I wanted to tell a different kind of story. I don’t really have a favorite van Gogh… In fact, his entire oeuvre is magnificent. The program was very well received and was very successful. And as a result, I have already done 4 other painters: Picasso, Gauguin, Chagall and now finally ‘Frida Kahlo’. This will be on TV in September. I love making these kinds of programs. They are great. They are all painters that I have a lot in common with.

KB: What are the plans for the future? Do you have a new film, series, or documentary in the pipeline?

I will be doing another Dutch film, but I can’t say much about it at the moment.

KB: You’ve worked with a lot of people: Harrison Ford, Tommy Lee Jones etc. Are there any actors/actresses or directors you still want to work with? People in your profession you admire.

I would love to play again with Meryl Streep. Wonderful actress.

KB: The whole world was in lockdown because of the pandemic. How did you spend this time? You couldn’t really go anywhere.

I made a whole series of paintings during the Lockdown which were all exhibited at De Fundatie in Zwolle, with the title ‘Silence’. It was published in a beautiful book.