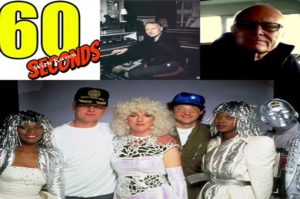 We all remember that 1985 music video where a girl calls the International Operator to contact her husband who is on the moon: The Rah Band with their great song “Clouds Across The Moon”. Richard Hewson is the man behind it and Rah stands for his initials: Richard Anthony Hewson. The band will perform for the first time in 40 years under the direction of Richard’s son Dan at The Jazz Cafe in London on 11th of June. Check it out!

KB: You used your first initials of your name Richard Anthony Hewson to create the RAH Band who had a huge hit in 1985 with Clouds across the moon: What is the story behind the song and the amazing video? I heard that your wife did the female vocals on that song.

It was written after I had been working in Hollywood on the film “Xanadu” and in those days (’83) there were no cell phones etc. so the only way to call home was through the “International Operator”. When I got back and continued work on a song I was writing, I had the idea of setting the lyric in a future space age and made the call to P.R Johnson’s wife through the “Intergalactic Operator” My then wife sang the song, though’ she’s not a vocalist, it gave it a charmingly vulnerable sound. Incidentally the video was not what I had wanted at all – I visualized a much earthier “Dark Star” vibe, still it did the job!

KB: Your career started in the 60s as an arranger and you worked with The Beatles on two albums I Me Mine and The Long and Winding Road: How did this happen and how was it working with them? You worked with Sir Paul on his solo albums?

Correction – they were the two tracks on the “Let it be” album I did. It is now well known that Paul did not want an orchestral arrangement to put on his solo voice and piano recording of “The Long and Winding Road” but John Lennon hired Alan Klien to “clean up” the album and brought in Phil Spector to work on it. Phil asked me to do a big orchestral score for Paul’s song which I wrote and recorded at Abbey Road. When Paul got to hear it, he went mad and didn’t speak to me for a year! Some people say that I therefore was complicit in breaking up the Beatles! However, Paul must have forgiven me because I later worked on “My Love” & “Dear Friend” for his Wings Project.

KB: You also worked with Sir Cliff Richard on several of his albums? I read you did the strings. You were also the conductor for The London Philharmonic Orchestra for his Live album?

Yes, this was a concert called Cliff Richard – “Dressed For The Occasion” at The Royal Albert Hall (coincidentally my initials RAH which gave me a title for my project – The Rah Band) Conducting the LPO was an amazing experience which I shall never forget. The players in that “band” are all brilliant musicians at the very top of their game, as witness we were only given one hour of their valuable time for rehearsing the two-hour concert but they read the score perfectly!

KB: You worked with so many famous people: Are there any artists you have not worked with yet but would love to and why?

Tony Bennett without a doubt. I love his albums with pianist Bill Evans (another hero of mine) and the “Duets ” albums. Can’t stop listening to them, such great musical arrangements too.

KB: If you could make an album with your 7 most favorite songs: Which songs and why?

I have a lot of unreleased tracks in my studio just waiting to be put together as albums, I don’t really have “favorites” – they are all like children, such different characters but all equally loved.

KB: You are a record producer, arranger, conductor, multi-instrumentalist: Which instruments do you play? What style of music is your favorite and why?

I started as a jazz guitarist emulating the great Jim Hall, then went to music college to study composition, piano & trumpet. I have a love of all styles of music from Stravinsky to Bruno Mars as long as it’s good!

KB: I read that in recent years you have been writing music for TV shows? Which ones? Do you have anything new coming out? Are you still performing Live?

I did some episodes of the ITV series Agatha Christie’s “Poirot” a while ago which was quite a challenge for me but didn’t get very into that genre, I’m more of a song writer/producer I suppose – there are a couple of Box Sets of my work coming out this Summer on Cherry Red Records. As for live performing, my project The Rah Band is going to make a live appearance for the very first time in more that forty years under the direction of my brilliant son Dan Hewson at London’s Jazz Cafe on 11th of June! I hope it won’t be another forty years before the next one!