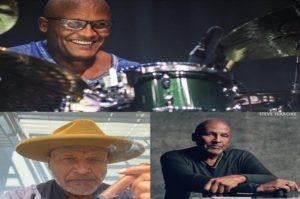 Stephen Ferrone is one of the best drummers in the music industry and was part of Tom Petty and The Heartbreakers from 1994 – 2017: the year Tom died very suddenly. Stephen has played with so many people. The list is mind blowing. He has his own radio show on SiriusXM ‘Tom Petty Radio’.

KB: Most people know you as the drummer with Tom Petty and the Heartbreakers from 1994 until Tom’s death in 2017: How did you get the job, how was it playing with Tom and your reaction of his sudden passing?

I was recommended by Mike Campbell to play on the Wildflowers album. We met playing with George Harrison in London. After the album was finished Tom asked me to tour with the band. I guess I just stuck around for another 24 years. I was devastated by Toms passing, as was all of the band. I think we all still are really. I never know when the tears will come.

KB: You host ‘The New Guy’ weekly radio show on SiriusXM’s ‘Tom Petty Radio’: Can you tell a bit more about this? What kind of show is it and do you have guests?

Tom asked me in 2017 to try doing a show on his SiriusXM station. I tried it, and it was more difficult than I thought to DJ. I loved the challenge and have done 102 shows to date. I try to mix old classics, with new artists I find, some I find whilst recording with them. Others come up in conversations with friends. I’ve had a few guests on the show like drummer Jim Keltner, Scott Thurston, and Ron Blair popped in too. I really enjoy doing the research for the show, I love listening to music.

KB: You founded Drumroll Studios in 2002: Can you tell a bit more about this and what you do here?

Yes, I started out at the suggestion of a friend to teach drums. I thought it might be good to give young players some studio experience. When it got around that I had a studio, people started sending me tracks to work on, and so it evolved into my own personal workspace. I love working there, I have all my drums, and don’t need to drive in LA traffic to get to work. I work a lot with engineer Eric Thorngren. We figured out how to work remotely when the pandemic started, so we could avoid the dangers of the unpredictable virus. It worked out pretty well really.

KB: You were part of the Average White Band for 8 years: You replaced Robbie McIntosh after he died, and the band had just a number 1 hit with ” Pick Up The Pieces “: How do you look back at this and did you enjoy it?

AWB was an amazing band, and it was an incredible life for a guy in his early 20’s to have. We did some fantastic work together, and I found a mentor in our producer Arif Mardin. He taught me so much about recording drums.

KB: If you were to make an album with 7 of your favorite songs: which songs would you pick and why?

Nomo Max Roach. Drums Unlimited. An amazing drummer, and really cool arrangement of a great tune.
More Than You’ll Ever Know. Donny Hathaway Live at Whiskey a Go Go.
What an amazing, super slow version. And what a vocal performance!!

The Edge of Darkness. Eric Clapton. 24 Nights
It never fails to give me goosebumps when the band kicks in. Michael Kamen…. Yeah baby!

See The World. Pat Metheny. Secret Story.
It’s Pat Metheny’s’ giant steps. An incredible chord sequence with an uncomplicated melody that just stuns me every time I hear it.

Heads or Tails. Booker T and The MG’s
An album wouldn’t be complete without this monster band of soul. Al Jackson, Donald (Duck) Dunn, Steve Cropper, and of course Booker.

One Night Stand. Al Green.
What a groove

Since I Had You. Marvin Gaye. I Want You
My absolute favorite groove track ever. James Gadson is sublime.

You Wreck Me. Tom Petty. Wildflowers
Spent many a road trip with my kids rocking out to this song. Great memories.

What Is Soul. BB King.
The first time I ever heard syncopation on the drums like this. Bernard Purdy be praised!!

Sorry, had to do a 9-track cd. Just couldn’t leave any off. There are others, but these………Wow!

KB: You worked with many artists: You played on several of Chaka Kahn’s albums, Duran Duran’s Notorious, Michael Jackson: Any artists you have not worked with, but you would love to?

I always wanted to work on a track with Flea from The Chili Peppers. I love the way he plays and would like to see how we would work together.

KB: The world has been in lock down for almost 2 years where people couldn’t do anything but stay at home: How has this been for you? What kept you busy?

My studio kept me busy when we found out how to operate in lock down. I learned to love my back yard, and appreciate my home, and my fiancé. A lot of couples split in lock down, we became stronger.