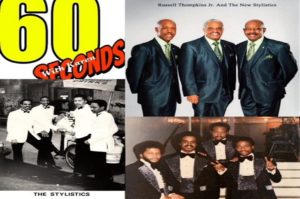 Russell Thompkins Jr. was the singer of The Stylistics, one of the many R&B bands from Philadelphia responsible for the Philly sound. Songs like “Stop, Look, Listen” and “You Are Everything” were huge hits in the early 70s. He left the group and formed Russell Thompkins Jr. & The New Stylistics in 2003. They are still performing, and he is currently working on his third solo CD.

KB: You are best known as the lead singer of The Stylistics: Did you always wanted to be a singer? Where is the high tenor and falsetto voice coming from? Anyone in your family?

I have been singing since I was a small boy. I always wanted to sing. The high tenor and falsetto voice are a natural gift. My father was a jazz singer.

KB: The band was all part of The Philadelphia sound: Who else were part of this sound and did you all know each other?

The Philadelphia sound included the Stylistics, Delfonics, Blue Magic, Harold Melvin & The Blue Notes and many more groups and individuals. We all know each other.

KB: You all had a small part in the movie “Hair” where you played army officers: How did you get this part and how was it working on the movie?

Our manager got us the part. We decided not to appear in the movie, but we did sing on the soundtrack.

I left the group in 2000 because I was doing all the work and the other guys in the group were not carrying their weight.

KB: You started studying music and learned to play the piano: How difficult is it to learn to play later in life? Have you released any piano music?

I started piano lessons in 2000. It was not difficult to learn the piano. It was something I always wanted to do. I have not released any piano music. I just play for my own pleasure.

KB: When did you form Russell Thompkins Jr & The New Stylistics and are you still touring with this line-up? Do you have anything new in the pipeline?

KB: If you were to make an album with 7 of your most favorite songs (No Stylistics): Which songs would you pick and why?

It’s difficult to pick just 7 of my favorite songs. I would pick songs from the Jazz and R&B genres.