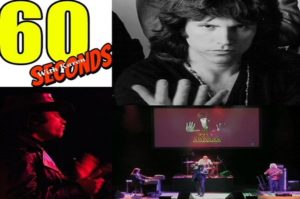 There are many Doors tribute bands out there, but The Soft Parade is without a doubt The Most Authentic. I have seen them Live and Joe’s performance on stage gives you the chills because it feels as if Jim came back. It is just stunning, and I highly recommend checking the band out.

KB: When did you decide to form a Doors tribute band and why the name The Soft Parade?

I was certain I could assemble, produce, and front a show that would be a “The Doors-live” theatrical experience. I set out to do that and in just two years we were doing massive European tours and receiving incredible attention and acclaim. We were the first band to re-create The Doors authentically. It had never been done before. As far as why the name The Soft Parade, I wanted to use something not so commercially recognizable, and a few different names were considered. To be honest, we chose The Soft Parade out of a hat. It was one of the titles on one of the bits of paper in the hat.d

KB: I have seen you Live and you look like Jim Morrison and have the same mimics and gestures: Was it hard to crawl in Jim’s skin and become him because that’s what you do?

I knew instinctively I could credibly, and that’s the key word; “credibly”, represent an authentic performance with integrity that captured the essence of Morrison. It was not something I learned or imitated. It was, and is, something I harness and inhabit when we’re on stage.

KB: When did you become a Doors fan and what attracted you to them to set up this tribute band?

A friend in school was the main catalyst. He was deep into them and introduced me to their music just before a nationwide resurgence occurred. This was in about 1979.

KB: You are older now than Jim ever would be but still you are going strong. Will there ever be a point when the world has enough of The Doors and Jim Morrison?

Well, I truly doubt The Doors or Morrison will become completely irrelevant, and I hope not. But Jim Morrison is no longer the epic, iconic rock ‘n roll paradigm he was, say twenty, thirty, forty years ago. It has gone down exponentially each year, I believe. But there is still a very solid fan base.

KB: Have you met anyone of The Doors? Ray (before he passed away), John or Robby? If not, would you like to?

I knew Ray quite well. We kept in touch for decades and met in person on numerous occasions for dinner, etc. He actually signed a formal contract to appear on stage with The Soft Parade for a series on concerts, but just as it was signed, the offer to reform The Doors with Ian Astbury arose and so our project was pre-empted. Robbie played on stage with us at an illustrious Paris, France theatre during a week-long Jim Morrison birthday celebration of events. It was an awesome show and people are still talking about its impact. I’ve kept in touch with him over the years and spoke to him recently. I’ve never met John, I so much want to, although I was told he came to see us incognito at a New York concert.

KB: If you could make an album with your 7 favorite Doors songs: Which songs would you pick and why?

That is a brutal question and would take several days to ponder adequately. I can say I would definitely include “Love Street” and “You’re Lost Little Girl” in my list. I tend to gravitate toward the romantic themes, personally.

KB: Are you currently on tour or having new stuff in the pipeline?

No Tours now, though we’re still a unit… and recording sounds like a nice idea. I’m glad you mentioned it.