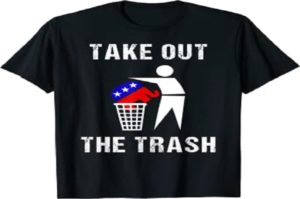 Regretfully and unhappily, there have been a number of issues, personal and business, which have kept me away from the keyboard for much too long, and I certainly acknowledge that this column is well overdue, so my apologies in advance for the interregnum between columns and I absolutely will try to improve the regularity.
But, and frankly, I think, feel and believe that the subject and topic of today’s submission far outweighs any concern other than said subject and topic, which is, I think, feel and believe strongly noted in the column’s title.

If you have no problem with the acts, actions, intransigence, viciousness, vile and hideous criminality (and that is exactly what it is, ethics-wise or actions-wise, everything that almost (notice that I am not indicting every single Repukenacan, because there are a very few who have a spine or backbone and who are willing to stand up to Trump and his associated degenerates as well as to the flunkies, gluteus-maximus kissers and other assorted thoughtless, mindless, ethics-less and degenerated scum of today’s Rethugnacan Party) then you (a long string of perjoratives could easily follow here) ARE the problem, plain and simple, and if you are willing to read on, you might discover why that is so, although, with what I have found in dealing with the Herr Trumpler nazi-lovers (I will NEVER, EVER capitalize that word, and neither should you: it is actually an insult to any human being with even a modicum of decency, which it appears, in something missing in the close to half of Americans who voted for Trump as well as those who continue to contend that the election was either “fixed” or illegal) who cannot bring themselves to find fault with or to believe that that thieving, lying, degenerate, whore mongering, contractor and employee screwing, tax dodging, five PHONY deferments-taking, six PHONY bankruptcies-taking, Putin-loving, nazi-loving lowlife piece of nothing other than trash has ever done anything wrong (his niece, Mary Trump strenuously disagrees, as does the Congresswoman from Wyoming and any other human being with even half a brain in his or her head.

Let us consider the following: Remember how the FAR right screamed blue murder in demanding to Mr. Obama’s transcripts, they actually and in actuality knowing well that no college or university (other than that phony crock of manure school in Virginia Beach run by the dead lowlife and now his equal level of slime son, as well as a few other totally non-accredited and without legitimate credentials of any kind schools) will ever release a student’s transcript to anybody including other colleges and universities without the written approval and consent of that student. But, as stated, facts and truth are immaterial to the nazi-loving slime which they are.

And why, Henry, do you mention that, and the response is “because it is necessary to do so.

And why, you ask again, do you think that is so, and the answer, dear reader is simple: Because the scum’s private body part licking liars, morons and fools who will make up any story to try to make the least deserving person in American history look good, they know damn well that, A) Trump paid another person to take the SATs for him, that, B) he was a total and complete screw-off as a student and rarely went to class, that C) no school, as noted above, can or will release transcripts, and that (is this most important?) that Herr Trumpler, the liar and the scum, never graduated from the University of Pennsylvania, and, yes, you can verify that.

Now that I have addressed the positive aspects of the man and his butt lickers, it is important to state the negatives regarding the Trumpites, especially those who have violated every rule of business by coming out in favor of a politician or political topic or platform, and among the numbskulls who have proven what total nitwits they are are “the pillow guy,” Lindell as well as the Chairman of Goya Foods, plus several others, and I, among, I am certain many others, will never, ever spend as much as one cent on the the products produced by their firms, whether sleep or comestibles-related.

People have said to me, “Henry, what could those nitwits who stormed the Capitol on January 6th, 2021, possibly have been thinking?” and my answer is always the same: damn fools—which every one of them was and is—don’t think, reacting only on impulse and emotion and that is what each of those brainless idiots did. Remember, though, that certain of Herr Trumpler’s backers tried to claim that those insurrectionists were “tourists,” and they were tourists like I’m Bill Gates, and, obviously, being Henry S. Villard, I can’t be Bill Gates.
So, dear readers, I will be honored if you have taken the time to plow through the above and to try to understand the points which I am making in this presentation. Frankly, if you are not a Trump supporter I think you can and will.

Please, all, be well and stay safe, and remember: there has been no greater subversion in American history than the intentional mis-reading of the Second Amendment, which starts out with these words and which the gun-loving anything but law abiding garbage want you to ignore: “The need for a well-regulated militia being evident….”

And that is what they want you to ignore. Yes the next phrase does talk about the rights of people to keep and bear arms but those people are the well-regulated militia (known in reality as the National Guard, not a bunch of half-baked, half-assed fruitcakes running around in the Idaho and other state’s woods claiming that they have a non-existent right (read that again: a NON-EXISTENT right) to run around with any kind or type of gun they choose to own, and the shamefulness of Marjory Taylor Spleen, Bitch McConnell, Whoreah Ingram, Glen Dreck, Spawn Hannity and their like in supporting that non-existent right in not only shameful, but is, yes, criminal. Period.