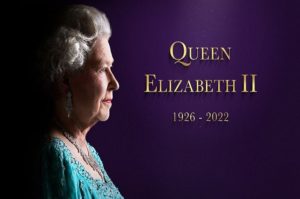 The United Kingdom of Great Britain and Northern Ireland is in mourning.

Queen Elizabeth II, monarch of the realm from 1952 until 2022, has died. This year she celebrated her Platinum Jubilee, 70 years on the throne, and as the longest serving British monarch she has now passed away. She did so after she appointed a new Prime Minister on the 6th of September, and so was working right up until then – 2 days before her death.

Queen Elizabeth II was a remarkable woman. She reigned for so long, there are very few people who remember a time when we were not ruled by her. This Elizabethan Age has been a difficult one for her to navigate. She assumed the throne on the death of her father and was to welcome her first Prime Minster, who was born in 1874, and appointed her last, who was born in 1975, in a remarkable period of life which has seen such change.

Born into life as a minor royal, she was never meant to be Queen. Her uncle, abdicated in 1936 as he was refused permission to rule with a divorcee at his side. And so, as Edward and Mrs. Simpson went off as former Royals, the Queen’s father, George, became King and Elizabeth became in turn, his heir.

When she became Queen, she promised to be a devout public servant and that she certainly was. You will search in vain for any scandal. I don’t think she has ever even met Oprah.
It is undoubted that she was someone for whom the dedication of being Queen was a vocation and she filled that role with dignity and pride. It is sad that the family shall mourn the loss of a mother, grandmother, great grandmother and much loved family member.

And now we enter the Carolean age of King Charles III.

And here is the problem.

When Elizabeth was crowned Queen, we still had the British Empire. The very first colony to decide not to be a colony was of course, the USA. It took a century and more for Ireland to be the second but by the end of the Second World War movements were beginning to develop which saw the Empire begin to crumble. In 1947 the partition of India and Pakistan had happened, and others were ready to move. The mainly, now, ceremonial duties of their sovereign, Queen Elizabeth, were beginning to have less luster, appeal and influence. But she still was head of state for Canada and Australia. It is now, King Charles III.

Such a connection with the past is not something we all enjoy. The British Empire exploited and pillaged large swathes of this planet, often leaving countries forever bereft of their natural resources and mourning the loss of their people who were taken off to pastures new in slave ships. It is not a legacy filled with pride.

It is also not Queen Elizabeth’s fault.

But it is the symbolic nature of the position she held which continues to peddle the subservient nature of these relationships. The Commonwealth has evolved from the Empire into a more modern and forward thinking global movement, but it still has the vestiges of Empire in its make-up and in the administration and legal frameworks which support their governments.
We have 10 days of official mourning.

On the 19th of September, there shall be a funeral and the country shall have a public holiday.

There shall then be a coronation and no doubt, there shall be another public holiday.

I am a little underwhelmed.

The institution shall continue, and its traditions shall endure.

The outpouring of grief and the Britishness being reimagined is not quite sickening, but it is sickly. Due to the nature of the Empire the national flag of Great Britain – the Union Flag – is known in some quarters as the Butcher’s Apron. Such was the ferocity of Empire and the appalling behavior of our representatives that people think less than warmly of our presence.

Queen Elizabeth II was the second Elizabeth as queen for England. It was not our second in Scotland. The first one murdered our Mary, Queen of Scots… You can see why we had an issue. Oh, and we do hold a grudge. Mary was beheaded in 1587…

Their function, the monarch, is similar to the executive function in most democracies. But for us it is not an elected position. An elected head of state, like a President, is not always as attractive as some of the more recent examples in France, the USA etc. are held up as warnings over the power of democracy whilst you know who you are getting with a monarchy.

Oh, and the dodgy ones, like Andrew get knocked down the pecking order so you needn’t worry about ending up with them…

But as symbol of who we are, though she was an exceptional example, it is not one in 2022, I believe we should be following. The idea of privilege, backed by one family’s right to hold dominion over all others is not just antiquated but morally questionable, it requires to be binned like all other forms of social engineering. We shall bow the head and take the knee and wonder why, when we face an economic crisis where people shall die in the winter, unable to heat or eat properly, in a country rich in assets and banking, that we are spending our energies in celebrating a past which was little better and should be challenged. The monarchy will not help us with the essentials to eat, but it shall be a distraction as the holidays, the pomp, the ceremonies shall still hold us in thrall, and it shall endure for now…