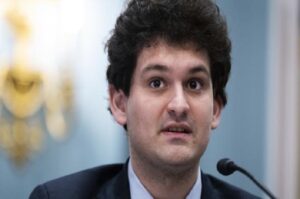 Let’s talk about a tale as old as time. A dog drops his bone into a lake; attempting to grasp the bigger illusion, netting zero. My Mama believed in saving her change in a five gallon water bottle. She amassed thousands this way, no bank fees, no illusions. Bit coin is as real as your total tally at Aunt Ida’s, where you bet at Bingo using beans, copper and toys. That’s my personal opinion. Don’t @ me. Here’s the scoop. Sam Bankman-Fried could not resist. He had to go sticking his hands in the cookie jar and when his rival company decided to sell $530 million worth of FTX bingo tokens, funds which Sam was counting on to cover his debts, he attempted to sell the company to the same rival firm, Biance, who; after uncovering the mismanagement of funds, declined the offer.

Counting unhatched chicks has always led to demise. How could someone so supposedly intelligent do something so stupid, especially when the entire world was counting on his absolute integrity? Right up until that moment, FTX, was one of the ENTIRE PLANET’S LARGEST cryptocurrency exchanges. It is now filing for bankruptcy. Trust broken, betrayal abounds, imagine being one of the people who played at that table of THAT financial roulette? Yes, I learned my lesson in 2009, losing my blouse, savings, nest egg at the table of stocks, 401K’s, IRA’s, et al, when the market crashed and an emergency arose. It taught me, if immediate liquidation doesn’t equal the tally shown, don’t bother.

What is worse is that Sammy, The Fool, was one of the biggest dem donors, giving $40 mil to the lefties, including $27 mil to his Protect Our Future PAC.

The CFTC, SEC, DOJ are now investigating WTH is going on and it does not look good.

Yes, he took the blame. Yes, he actually tweeted an explanation which included: “And so, we are where we are, which sucks, and that’s on me. ” plus “I’m sorry.“

Let me know how that works out for you who are; or were, invested.

He intends to do right by users which is a cut above the Bernie Madoffs of the world. There’s that.