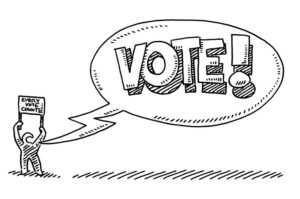 We are a little flumoxed by the whole thing…

Don’t get us wrong, it is not like we don’t approve. We just don’t get them.

Let me explain. It would appear that you register as a voter for one side or another. And then you get a vote as to which candidate from that side you would most likely want to be your Presidential candidate… And then over a period of time, the candidates all run off and you get to have two people running – one democrat and one Republican – voted for by their side, now up against each other to try and win enough College votes – we get that, now – to become the President of the United States of America.

But it appears that this is all run by the state?

In the United Kingdom, anything which involves the politics of the parties needs to be paid for by the political parties themselves. The elections for political office are run by the state. Any outside interference by the state is seen as being more than a little dodgy and not to be encouraged.

Right now, in the UK, we have an Act of Parliament where voter ID shall be required to vote. Up until now, all you needed was to turn up and tell the nice people your name and your address. People are so cynical over politics in the UK that hardly anyone has ever tried to illegally vote.

So why the new law?

We have, of course, got our third prime minister of the year so we can hardly be overly critical about how other democracies operate – we seem to be particularly careless with our heads of government.

But we are in a time, in this world when democracy is in the spotlight.

The Ukraine is literally putting their lives on the line for it. In Israel and in Sweden it has led to a new resurgence of the Far Right. In Italy too it has brought these Far-Right Parties into Government. Bringing people who do not believe in the very principles which have brought them into power is a dangerous thing, of course it is, but the fact remains democracy as a principle truly needs us to recognize its worth.

And so, for the US, President Biden’s announcement that he is considering moving Iowa and New Hampshire from their position in the primaries for both the Republicans and the Democrats did not register much for us here – but it sure did register in the States, by the looks of things. There is a souvenir store in Iowa who may have to reimagine their merchandise which reads “Iowa: For some reason, you have to come here to be president.”

Like the legislation looking to become law in the UK, the change may be subtle, but it is significant. Tinkering with things can be dangerous but democracy must be robust enough to withstand all the slight alterations with which it has to deal. It should not be sitting in a place where it is unquestionably the same today as it was 10, 20, 100 years ago. Things need to move on.
All things need to progress.

What was once important and significant can be quite lethal today. And whilst we consider voter fraud and you consider which states should come first in the primaries to set the 2024 Presidential agenda, perhaps making it a state where there have been mass school shootings might help work out why the USA hold onto the Right to Bear Arms at a time when such a thought seems to the rest of us in the world, a perverse right…