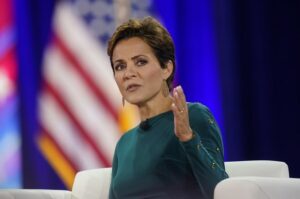 My eyes rolled, they; too, want to file a lawsuit – against the Arizona big time loser, Kari Lake, for being subjected to reading ANYTHING more about her.

Don’t “THOSE” people realize? WE, THE PEOPLE, HAVE SPOKEN. BACK TF UP! What is so doggoned difficult to understand?

My four year old grand-daughter can spot a lie in an instant. She raises her tiny finger; in an accusatory fashion, and tells anyone she deems unworthy that they are lying and will never be invited to her birthday party, ever again.

She’ll tell you Santa is watching and so is The UNIVERSE. (I’ve taught her well).

I showed her an article I was reading on my phone, pointed to Kari Lake’s picture saying: You see this lady? She nodded silently while staring at Lake, who’s fine was also pointed out accusing someone or something. ‘She lost a competition and instead of shaking hands with the winner, (as she has seen people do when her mother flies past them to the finish line of any race she enters) she is insisting that the other person cheated and is demanding to be called the winner. She even filed a lawsuit.’

My grand-daughter looked straight at me, trying to make sense of the situation, thought a moment and with a furrowed brow said: “She must be stupid.”

Yes, Ladies, Gentleman and Others. A four year old gets it.

She wants to be 45’s VP. That’s why. She is emulating every characteristic, every nuance that she sees on display by the clown creep who would be king.

She needs to be silenced. Someone needs to call her and tell her to stop it. Just STOP! WE HAVE HAD ENOUGH OF THE GASLIGHTING. You lost. Now, go away. Take your dollar store light ring, cheap make-up and lies with you.

These insane folks believe that repeating a lie will turn it into the truth. This tactic only works for other highly uneducated racists, who latch on to any possibility of seeing their hateful agenda emerge victorious. It will not work for the remaining population.

It is high time that these accusations and false narratives are called out for the lies they are and those who are singing these songs need to go fish.

Till next time. Here’s hoping!