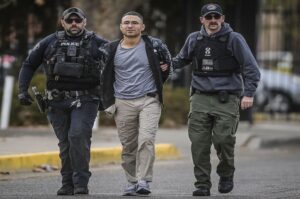 A 39-year-old man from New Mexico has been arrested for paying four men to shoot at Democratic lawmakers’ homes, according to the Associated Press. Solomon Peña, who is also a felon, lost his bid for the statehouse and ran as a Republican. The report also notes that one of the homes had a 10-year-old girl who was sleeping inside.

Peña’s campaign material included pictures of him with former President Donald Trump. He is one of dozens across the country who have threatened violence against political opponents and acted upon it. In Kansas this week a trial is set to begin for a man who threatened to kill a congressman. This is an unfortunate trend that’s been rising in the United States since the Trump era.

According to reports, law enforcement officials are accusing Peña of paying four men a sum of $500 to shoot at the homes of Democratic lawmakers. Peña himself “went along for the final drive-by, his gun jamming as bullets ripped into the bedroom of the girl,” authorities said.

The criminal complaint against Peña describes how the self-proclaimed “MAGA King” let his anger over his landslide defeat in November led to the attacks “at the homes of four Democratic lawmakers in New Mexico’s largest city,” per AP. A SWAT team arrested Peña on Monday afternoon, said police.

In November, Peña ran an unsuccessful bid against incumbent New Mexico state Rep. Miguel P. Garcia, a longtime Democrat representing House District 14. Mr. Peña got only 26% of the total vote. Naturally, his criminal past was brought up during the campaign, and he repeatedly made frivolous claims that the election was “rigged” against him. “I dissent. I am the MAGA king,” Peña posted the day after the election.

On Nov. 15, he posted an image of himself in a “Make America Great Again” hoodie, posting that “Trump just announced for 2024. I stand with him. I never conceded my HD 14 race. Now researching my options.” Sounds familiar, eh?

Peña’s voting rights were restored in April 2021 after serving time for his role in a burglary crew. His initial court appearance on Wednesday was regarding the charges that include “multiple counts of shooting at a home and shooting from a motor vehicle, aggravated battery with a deadly weapon, conspiracy and being a felon in possession of a firearm,” per the AP’s report.