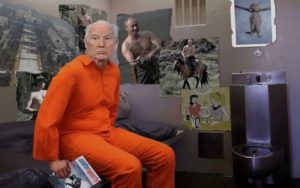 Truly, I hope you have enjoyed my first two submissions, those from a non-writer. Unfortunately and unhappily, I have been motivated by the anything but a man in the White House to “put the pedal to the metal” and start to write about the horrors which he has created, those beginning in his childhood.

Please read the below. As I wrote previously (and above), while I am certainly not a polished or proficient writer, neither am I a plagiarizer, hence much of what I put forth here comes from other sources, which I feel must be shared with you, primarily because it is up to us to see to it that the monster in the White House does not get to remain therein for another four years.

(This is from an on-line news feed called “Nation of Change.” It appeared on March 30, 2020—and was written by the eminent Robert S. Becker. I truly hope you enjoy it.)

The question for the next six months: Will the damage from Trump’s past, present and future crimes against humanity make him less electable?

Become a powerful force for change.

What a double whammy. Flush with callous denial and obsessed with T.V. circuses, not pandemic fall-out, the Actor-in-chief was late to the viral party. Now Trump seeks to apply his willful blindness (and love of profits) to set an end date for a virulent disease — his dumbest, mind-numbing notion so far. Questions of “who’s in charge?” are eclipsed by his refusal to take any responsibility for the self-induced, upcoming calamity.

The magical thinking of President Bozo now boasts prime time: “just say no” seems the mantra, by a guy without religious scruples who presumes God will on cue withdraw His? Her? “Biblical” plague. As with the Ukrainian president, he’ll just ask “a favor.” Yikes, Trump’s beautiful” vision of church-packed pews will be mangled badly when congregants leave with aggressive contagions. Some consolation. One for all, and whole families contract coronavirus, old and young alike. Beats the drama of your old Easter egg hunt.

Easter honors a great leader’s resurrection, but does that mean church-goers have to imitate Jesus’ premature passing? Imagine the hosannas: hospitals overflowing and morgues of corpses who obeyed an expertise-hating politician without faith or charity. I wonder how “I needlessly killed off thousands of citizens” wins over voters? Perhaps only widespread suffering will be the 2X4 that finally shreds Trump’s Teflon veneer.

Fact: U.S. disease numbers explode while South Korea, learning about Covid-19 the same January day, is on the mend. Trump fiddles and fudges, crowned now with a final tantrum of anti-science defiance that nullifies the only rational disease check: social distancing. Brace for vulnerable red-staters to widen the pandemic, overload local hospitals and fulminate with floods of funerals.

As Mardi Gras revelers belatedly shoulder the downside for “letting the good times roll,” Trump wants crowds to mingle and let the infected hot air roll. What could go wrong? Can once suckered centrists remain blind when the president of lies morphs into the president of mass death? That tops the voters’ price for “disruption.” Surprise, when “so much winning” Trump promised will backfire when science-denial turns a pandemic into cruel, random population control.

So, I must disagree when sensible NY Gov. Cuomo expresses surprise anyone would make “the American people choose between public health and the economy.” Trump and rightwingers are pushing just that. Sorry governor, one very significant American willingly jeopardizes the national health to “‘accelerate the economy at the cost of human life.’”

Even more reluctantly must I agree with erratic senator Lindsey Graham who, according to WP’s ace reporters, bluntly told a resistant president: “If you reopen the nation’s economy too early against the advice of public-health experts, you will own the deaths from the novel coronavirus that follow.” Exactly. Graham also warned the Oblivious One GOP officials will tumble, sacked for driving “commerce and the stock market over the health and safety of the American people.” Rethugicans, imagine?

Killing off your own

What a tragic, painful irony. Older white, non-college educated, often rural red state males inform the cult that absorbs Trump’s happy talk lies, even the pandemic as hoax nonsense. Their states (and lackey governors) are behind the disease curves, as with opiates, so death-dealing Trump politics end up victimizing his own voters with low-hospital density. What president ever willfully took out his own supporters months before an election? Yessirree, this is one smart cookie, with followers to match. Ventilators, anyone?

The Big Lie started early on when Trump first blamed Democrats and the media for creating (even spreading) this phony pandemic hoax, later scorned as the “Chinese” flu. The fiction this flu was no great threat evaporated fast, but Donald the Denier downplayed the virulence for critical weeks of inaction. Did he not know what “pandemic” means? Does he not today? Is he so ignorant of history (or callous to people’s misery) he failed to realize the avoidable death toll would be five or ten times worse because of inaction and happy talk?

And now this icon of compassion wants to open all church doors in two weeks just because “Easter means so much to me.” Good grief: Donald suddenly got religion, though invisible throughout his immoral life dedicated to violating the 10 Commandments? I wonder if the germ-hating Donald rushes to join crowded Sunday sanctuaries?

Will punishment fit the crimes?

Let’s finish with the big November picture. What happens when 30% lose their jobs? Or when deaths double and double again — without “passing over” Trump cultists lacking doorframe markings, like Israelites in Egypt. Is this the horror show necessary to depose the Pandemic-in-Chief, already getting away with countless fantasies, like wind turbines cause cancer? Or declaring that 50% of 1918 flu victims died (when only 2.5% did)? Enter the Donald of Mass Die-offs? The Trump of Terrible Terminations? Donald the Domestic Apocalypse?

If Trump fatigue weren’t already mounting, say as fast as the virus, the next month or two augurs ill. Will Trump continue to escape ridiculing governors doing so much better for their residents? Will he never get punished, during a national emergency, for threatening to punish indefatigable, real leaders who won’t fall to their knees with praise? Bad faith squared, erupting into mass deaths and illness, must take its toll. Trump is more exposed by this crisis than ever before — and eventually there will be justice at the ballot box. Can we tolerate a self-declared “war president” who not only can’t alone fix anything, but declares a monumentally false victory — embracing holiday festivities while fatalities increase?

A plague is nature’s reminder prideful human dominance is illusory and transient, at times a total fiction. That gets amplified by an ineducable “temp” way out of his depth whose arrogance feeds on illusion and fiction. The question for the next six months: will the damage from Trump’s past, present and future crimes against humanity make him less electable? All else is noise. Today’s tiny virus is among the Democrats’ best reinforcements, dramatizing why Status Quo Joe or Bernie Sanders must replace an unfit pretender.