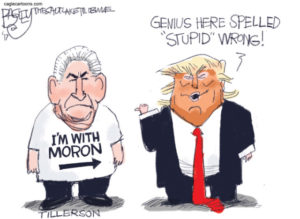 As I think I have made it clear in my first several columns here on Mr. Berkwitt’s fine website, I will never plagiarize, using, in any way, shape or form, phrases, comments or paragraphs taken from another source without giving full credit to the source. Hence, you will have, in this blog, several comments clearly stating the source or sources, following which I will have several comments that bear upon the topic.

First, though, I quote the famous anti-nazi (I will never, never, never, ever capitalize that word; unfortunately I am reaching that point of disgust and revulsion with the republican party and will no longer consider those two words a proper name, hence, they will only receive lower case for the first initial of each of those two words), Pastor Martin Niemoller, who did wind up in a concentration (but not a death) camp for his opposition to the nazi party, which the republican party is now seeking to emulate. (You think not? Remember that Trump’s bedside reading—yes, seriously, and please check it out on snopes.com, which I did—was Mein Kampf.)

Pastor Niemoller, in 1935, made the following comment (this from the ushmm.org, the Holocaust Museum, and numerous other sources):

“First they came for the socialists and I did not speak out—because I was not a socialist.

“Then they came for the Jews, and I did not speak out—because I was not a Jew.”

“Then they came for me—and there was no one left to speak for me.”

Ladies and gentlemen, I hope and pray that you can and do and will understand what is happening in this once-great country, where we are in the midst of the most horrific domestic war (although, yes, the plague is world-wide) in our nation’s history. It is bad enough to know that, in 2015, Bill Gates gave a talk on how important it was then to prepare for what he knew would be a pandemic; in 2016, the most inept, incompetent, corrupt and totally without qualifications for leadership of any kind was—in a completely rigged election—elected President and in that same year, almost within days of the election, he was warned of and about the coming pandemic; suffice to say, the list goes on, with him, in 2018, disbanding the CDC’s Pandemic Task Force, an act of misfeasance (he is guilty of all three, by the way, mis-, non- and malfeasance) which alone should have been cause to have him removed from office.

The question, therefore, that you must consider, given the above and all the other totally and completely flawed actions he has engaged in, all of them meant to enrich himself, his family and his closest co-conspirators at taxpayer expense, is the following:

Who is more vile, more wretched, more evil and more corrupt, Donald Trump or his molten masses of moronic and maniacal minions who see no wrong in anything he has done and who continue to support him in a manner clearly mindful of the German citizenry’s support of Hitler from late 1932 on. And among that cadre of liars, degenerates and traitors are people with names such as Mitch McConnell, Mike Pence, Steven Mnuchin, Betsy DeVos, the AG, Barr, the not a brain surgeon who is secretary of Housing or some such, Ben Carson, and an unending list of lackies, sycophants and fawning little fools who are, along with Trump, his family, and a few other close associates, endlessly profiting by and through every illegal and contrary to ethical behavior or decency action that Trump engages in. Again, the fact and truth of the matter is that neither he nor any of those named or any of his followers have anything even resembling a moral compass, and this country is now suffering mightily because of it.

Our first exhibit for today is this piece from an organization called “People for the American Way” and without commenting on how I might or might not feel regarding that organization, I urge you to read the below very careful and understand the validity of it:

“Over the past few weeks, we here at PFAW have, along with many of our members, watched with growing incredulity the ballooning volume of lies, misdirection, and disinformation flowing from the White House during this worldwide health crisis. Donald Trump initially dismissed the danger of the novel coronavirus, or the disease it causes, COVID-19, in the presumptive service of his reelection campaign. After weeks of pure denial didn’t work, his responses grew increasingly erratic, veering from calling for the country to “re-open” by Easter to seeming to actually take the crisis seriously – and everything in between.

It’s impossible to know what position Trump is going to take next on the pandemic. Given the magnitude of the incorrect information and bad behavior coming out of the White House and the Trump administration during this crisis, PFAW will be posting a weekly round-up of the highlights – or, should we say, low-lights. Every week, we’ll collect and post the most important of Trump’s falsehoods and failures about the coronavirus to help us all hold him accountable.

Since a lot has happened since the first case of COVID-19 was confirmed on U.S. soil, this week’s post will be a quick overview of some of the worst and most recent missteps. It won’t include everything that’s happened since the crisis first emerged because, frankly, this post would be longer than the full text of the Coronavirus Aid, Relief, and Economic Security Act.

Trump has repeatedly fallen back on his favorite weapon during this crisis to motivate his base: Racism, in this case against the Chinese and Asian American communities. (From HSV: Please be aware that at some point he claimed that the Coronavirus was “a conspiracy between the Chinese and the Democratic Party to make me look bad….”)

The White House daily coronavirus briefings have become a showcase for Trump’s allies and corporate executives, irrespective of their knowledge of or relevance to the crisis, demonstrating Trump’s preference for those he perceives as being aligned with his interests over the well-being of the American people. (From HSV: his son-in-law, Jared, has no medical knowledge or experience of any kind, yet he is a leading member of the coronavirus task force)

Relatedly, the briefings intended to be focused on the pandemic are now also serving as Trump’s only avenue for partisan political rallies to energize his radical base as part of his reelection campaign.

Disinformation continues to permeate the administration’s messaging, with Trump and his congressional allies, like Mitch McConnell, promoting false claims that the House Democrats pursued pay raises for themselves in the coronavirus stimulus package and that the impeachment inquiry “diverted” Trump’s attention from preparing a health crisis response (despite the fact that an administration’s duty is to address all pressing issues, no matter the number at any given time).

Rather than work in equal partnership with the state leaders who are so crucial in carrying out the government’s response during any health crisis, Trump argues with them, shares incorrect information, and publicly shames them for asking for federal resources and correcting his falsehoods. (From HSV: I hope that you are watching the nightly news programs and have noted that the non-genius in the White House has not only mocked the governor’s and their requests for ventilators, masks and other equipment to fight this terrible disease but has told them they don’t need anywhere near the number they do need and that they are exaggerating their numbers; that, of course, is another total, complete and absolute lie by Trump)

Trump chose to wait for more than a month to invoke the Defense Production Act to increase emergency production of medical supplies, despite health care experts urging him to do so as early as late January or early February to avoid the impending severe supply shortage.

Taking advantage of the fact that the public’s attention is focused elsewhere, Trump continues to use the pandemic to advance right-wing and corporate special interests over the good of the country; for example, by rolling back U.S. regulations aimed at curbing the destruction of climate change through weakening fuel economy standards.

Of course, Trump and his administration aren’t the only Republicans spreading misinformation about and taking advantage of the coronavirus. Members of Congress seemingly have sought potential gain through the stock market crash, and as PFAW’s Right Wing Watch continues to track through their own round-ups, far-right figures are also capitalizing on this crisis to spread extreme rhetoric, conspiracy theories, and other lies.

But this weekly update will focus on Trump’s lies and dangerous behavior and actions. Because when it comes to any catastrophe, the buck stops at the top – and Trump has a lot to answer for. (From HSV: There is more to this and the PFAW is actually being kind—Trump’s mentor, Roy Cohn, was one of the biggest quislings and degenerates in U. S. history, and Trump openly stated that among the things he learned from Cohen was to never, ever, admit wrong doing and to never, ever hesitate to lie and lie and lie.)”

Folks, there certainly is more that could be added here from other sources and I will do that in the coming days, but right now will leave you with two thoughts: this faux president is the single most-incompetent and single most corrupt (yes, even more so than Huey Long or any member of any council or any elected person in Illinois, New York or Florida history) human being (he barely qualifying for that term) to have ever served in any elective office in this country, and in terms of “The Buck Stops Here,” please remember that Trump has never—never ever—in his life taken responsibility for anything. He is a prevaricator and a calumnist of the first and worst order. That is all he has ever been and that is all he will ever be.

Please stay safe, my friends, and thank you for the positive comments regarding this column. With all good wishes.